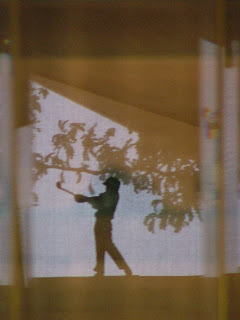 A couple more aces before we closed for overseeding: 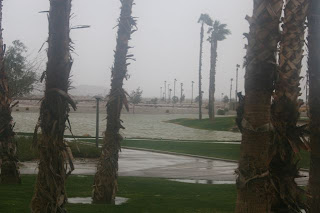 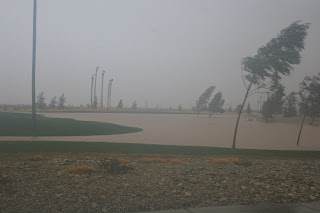 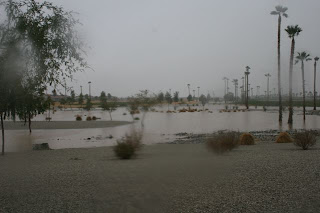 As everyone knows the storm that came through during the past few days dumped a bit of rain.
For your viewing pleasure Jim Moore braved the elements for a bit of time and took a few pictures.

This short entry will catch everyone up to date on the Aces through the end of 2009.

Gentlemen, congrats. This is Tom Landin's second ace at RRGC since it opened.
Posted by Dave at Sunday, January 24, 2010 No comments: 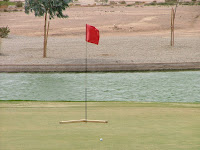 The second annual Goofy Golf Tournament was conducted on the afternoon of October 4th, the last day before the commencement of overseeding. Sixty-two players competed in the event which featured a different “challenge” on each hole. Players had to contend with such “challenges” as hitting a tee shot from a stool, playing with clubs of the opposite hand, and two-by-fours set strategically around the hole.

The format was a nine-hole, four-person scramble with all players hitting from the Plum tees. This year the weather conditions, with winds gusting to 30 mph, played a part in the outcome.

A final Ace before overseeding

We had one final hole-in-one before we closed for overseeding on October 5.

What makes the FedEx Cup so unexciting

The Eye On Golf staff got to thinking the other day about why the PGA Tour's FedEx Cup is just so doggone unexciting. Why is it that each event seems like just another four-day, 72-hole PGA Tour golf tournament? Where is the spectator anxiety? Where is the sit on the edge of your seat and scream at the television exhilaration?

So, after lengthy discussion we think we have an answer (or perhaps two) to this most pertinent of golf questions. First no one, except maybe a few talking heads at PGA Tour Headquarters and a few golf scribes, really and truly understands the elimination system. This is the third year of the FedEx Cup and the third attempt at a working playoff system that will generate the ultimate champion. This year, when the third event of the playoffs ends on Sunday, the top thirty players in FedEx Cup point standings will move on to the Tour Championship in Atlanta just like in year past. However, at this watershed all the points that a player has earned throughout the season will be reset and the claim is that any player within the top five who wins the Tour Championship will win the FedEx Cup.

Of course, this has all kinds of nonsense scenarios wrapped up in it. A player could win all the money, lead the FedEx Cup point standings by a mile going into the Tour Championship and then lose the final event by one stroke and walk away without the precious Cup. Do you have a player in mind here?
Second, and perhaps most important, is that this playoff system doesn't generate any thrills except for the fabulous golf. Those actually attending one of these playoff events are there because the circus is in town and it's fun to go to watch the best players in the world. Those of us watching at home just want to see some good golf. We believe that the lack of excitement is due to the length of each “playoff game.” Each “elimination game” is four days long, much too long to generate any allure. The NFL playoffs which culminate in the Super Bowl are a one game, one day events. You don't have to go to the stadium for four days to find out who the winner is. NASCAR has a ten race finale, The Chase, that builds anticipation through each of the final ten races. Once again, each race is a one day event. Fans look forward to that one weekly experience that may make or break their favorite team or player. The sense of excitement and anticipation builds week to week.

The PGA Tour will not get to experience the thrill of victory and the agony of defeat until it figures out a way to generate that week-to-week excitement.
Posted by Dave at Sunday, September 13, 2009 No comments:

The Labor Day weekend promotion for America’s Vet Dogs conducted by Robson Ranch Golf Club proved to be a huge success. A total of $200 was contributed by the members and homeowners of Robson Ranch, Arizona plus the outside guests.
America’s VetDogs uses guide dogs, service dogs, and innovative technology to help disabled veterans and active duty personnel live again with dignity and self-reliance. They serve veterans who are blind or visually impaired; have lost limbs or suffered traumatic brain injuries; or who suffer from post-traumatic stress disorder.
Robson Ranch, Arizona is part of Robson Communities, Inc. with projects in Arizona and Texas. It is located in the Eloy/Casa Grande area of Arizona between Phoenix & Tucson, and serves as a resort-style community for pre-retirees & retirees. Lavish country club amenities provide a wonderful social atmosphere for people who share common interests and enthusiasm for life.
The entire staff at Robson Ranch Golf Club would like to thank all players who contributed to this worthy cause in support of America’s Heroes.
Posted by Dave at Wednesday, September 09, 2009 No comments: